The list of countries that Americans are allowed to travel to is still fairly small, though it is growing by the week. Countries take different approaches to welcoming visitors — some allow visitors without restrictions, some require COVID-19 testing before departure, and some require testing upon arrival.

As I wrote about several weeks ago, Costa Rica started welcoming tourists as of September 2020. However, the country took a different approach to what we’ve otherwise seen.

Costa Rica has taken a phased reopening to tourism, and started with just five weekly flights between the US and Costa Rica, representing less than 5% of 2019 levels.

Costa Rica began allowing visitors from the US as of the beginning of September, but only from select states. Visitors had to prove they resided in one of these states by presenting a driver’s license or other form of state ID to prove that they’re from there.

That list has grown since it was first announced, and currently Americans from the following 20 states and territories are allowed in Costa Rica:

Then as of October 15, residents from the following states will be allowed:

Finally, as of November 1, 2020, visitors from all of the US will be allowed.

Costa Rica’s tourism minister has made it clear that states are being chosen based on having similar or lower coronavirus infection rates to what is being seen in Costa Rica. The problem is that coronavirus is getting significantly worse in Costa Rica, so that’s not necessarily saying a whole lot…

As a precaution, visitors to Costa Rica need to show proof of a negative PCR coronavirus test taken within 72 hours of travel to Costa Rica. There will be no option to get tested on arrival.

The requirement to get tested within 72 hours of travel is pretty standard at this point. Airlines are starting to partner with labs to make testing before departure more accessible, so hopefully over time this becomes easier.

Other requirements to visit Costa Rica

In addition to the state restrictions and PCR testing requirements, there are a couple more requirements for tourists:

Costa Rica has a population of about five million people, and has seen a total of nearly 80,000 coronavirus cases, and 950 coronavirus deaths. Both of those totals have more than doubled compared to September 1, which was just over a month ago. 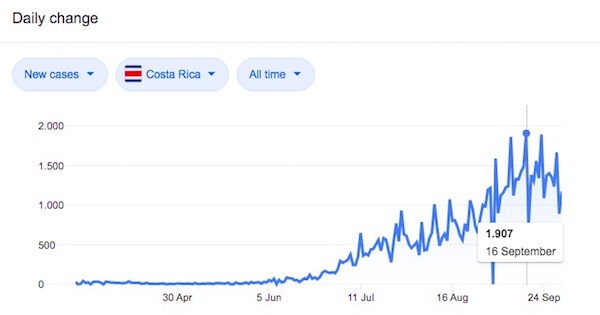 On the surface it’s an odd time to open borders to tourists, but then again, so many countries are struggling to find the right balance between restarting the economy and keeping people safe.

Costa Rica started welcoming American tourists as of September 1, though only from select states. As of November 1 the country will start welcoming Americans from all states. For all visitors, a negative PCR test must be shown that was taken within 72 hours of travel.

As is the case with most countries that have reopened, don’t necessarily expect the timeline or current policies to stick. International travel regulations are constantly changing, and we’ve seen a countless number of countries adjust requirements, or backtrack on reopening altogether. There are lots of risks to international travel right now.

Anyone have Costa Rica on their radar for a trip at some point?