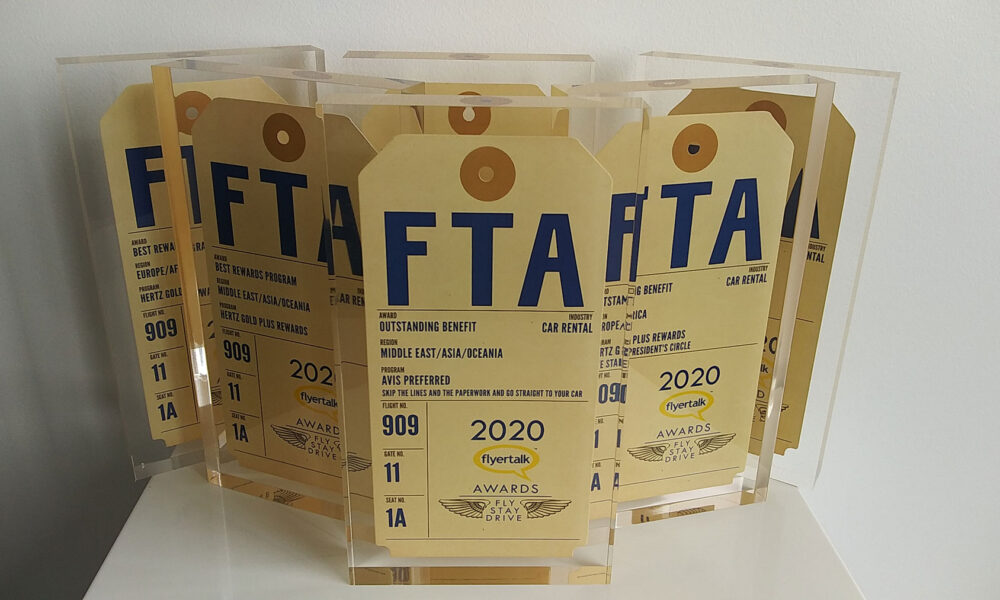 And The Winners Are… Announcing the 2020 FlyerTalk Awards Winners

We’re in the midst of the election season, and one of the ways to show your support for a candidate is by casting your vote.

We are, of course, talking about the annual FlyerTalk Awards (this is a travel site, after all). The polls have closed, and we’ve got the results.

Car: Avis Preferred — Skip the paperwork and go straight to your car

How the 2020 FlyerTalk Awards Were Decided

Although the COVID-19 outbreak caused a delay in the awards announcement, the votes were still counted and the trophies have been sent. We’re excited to showcase the best in travel loyalty brands from the 2019 calendar year. To get the inside scoop, ee caught up with FlyerTalk Awards producer Paul O’Brien to talk about the winners, the upsets and the surprises.

As predicted, Alaska Airlines Mileage Plan is one of the winners in the Americas region. In fact, the program has taken the award for the second time in the last three years. Its generous earning structure and stopover rules have earned Mileage Plan the coveted top spot.

“When [Alaska Mileage Plan] broke through and won their first FTA a couple of years ago, we were not shocked,” O’Brien said. “Even though Alaska is not a huge legacy carrier like United, Delta and American, its rewards program has the opportunity to really shine in the FlyerTalk Awards, because the FTA’s scoring system weights everything toward quality, rather than pure vote volume, leveling the playing field for programs that have fewer participants worldwide.”

Like Mileage Plan, Qatar Airways Privilege Club is also taking a second win in the last three years in its respective category.

“Qatar is a program that has always hung around the winner’s circle in the Middle East/Asia/Oceania region,” O’Brien said. “Something that stood out in this year’s voting is the number of voters who placed Qatar in their No. 1 slot (FlyerTalkers can place their top four programs in order 1-4 on their ballots), and very few who voted for Qatar put them in the 2-3-4 slot, an indication that those who flew them were highly satisfied, and a recipe for FlyerTalk Awards success.”

As for hotel loyalty programs, it’s not surprising to see Hilton Honors to earn the triple crown. Marriott’s merger woes heavily affected this year’s results, and Hilton Honors claimed the top spot in all three regions.

“The launch of the new Marriott/SPG merger program was rough, to say the least, and now that it’s smoother out into the new program, FlyerTalk’s expert travelers have not exactly rebounded in their enthusiasm,” O’Brien said. “We’ve seen anecdotal evidence that some of them are moving their loyalty to other programs, and Hilton seems to be the major beneficiary; but even for those who are either sticking with Bonvoy, or ‘stuck’ with Bonvoy, some are clearly punishing the program in their Awards voting, in the hopes that Bonvoy’s leaders will listen.”

Hertz is back at FlyerTalk Awards with yet another dominant performance. Despite their bankruptcy earlier in 2020 due to the COVID-19 pandemic, the car rental company won in five of the six categories—a stepdown from sweeping the FlyerTalk Awards the last two years in a row.

“The fact that [Hertz] ‘only’ won five of the six Rental Car Awards this year is actually a huge coup for Avis, who won its first FTA ever!” O’Brien said. “Hertz usually sweeps the entire industry. One has to guess that Hertz is so beloved on FlyerTalk because they are catering to the business traveler who leverages her/his status and points into their leisure travel—this is FlyerTalk’s bread and butter.”

There you have it, FlyerTalkers. Don’t forget to vote in the next year’s FlyerTalk Awards to show your appreciation for your favorite programs. And loyalty program executives, make sure to continue offering enough perks for your members to earn their vote.