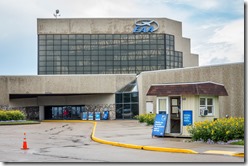 With thunderstorms lined in assaulting waves on radar and pathfinding drops splattering themselves against my office window, changing my Saturday morning plans for a two-wheel ride to Rio, Wisconsin, seemed prudent. Remembering that the EAA Aviation Museum had reopened on the previous Monday, a visit there would be interesting on several levels, especially since it has been several years since I last paced my way around its winged occupants.

Turning into the museum driveway, the blue signs saying the EAA grounds were closed to the public were gone. Orange cones funneled me to a forkliftabale light taupe AirVenture kiosk that sheltered a man with a mask. He asked if I’d been out of the state anytime in the past two weeks. Nope. Did I have any respiratory problems? Nope. Did I have a fever? Not that I know of. Drawing from some unseen holster, he held a temperature-sensing pistol to my head. It beeped. He asked one more question: Did I have a mask? Yup, it’s in my pocket.

Parking beyond a cluster of maybe a dozen or so cars, most of the license plates I passed were from Wisconsin, with a few from Michigan and one from Minnesota and another from Indiana. It seems the Illinoisans were taking their states quarantine requirements for anyone from or visiting Wisconsin seriously, or was that just for people living in Chicagoland?

Four signs led me to the front door. The first said masks are required for everyone 5 years and older. Next, museum attendance was limited to 150 people, and if it were full, you’d have to wait outside until someone left. EAA would prefer admission payment with a credit card, but it would still accept cash. (EAAers just need to show their membership card.) The final sign graphically dictated the distance and hand-sanitizing parameters of social distancing. 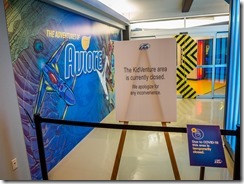 After showing my membership card to the nice lady behind the Plexiglas screen, instead of saying hello to the cluster of docents that usually awaited visitors just steps into the museum proper there were just more signs. One reminded everyone to maintain 6 feet of distance. The other said the hands-on exhibits, the Johnson Wax S-38, Willan Space Gallery, KidVenture, the cockpit, Wright Flyer, and powered parachute simulators, were closed.

But the faint scent of airplane still permeated the calming museum half light, as it always has. Shrugging off my inability to remember when I’d last visited, I set off on my atavistic path forged when I needed to stretch my legs or clear my mind when my office was on the other side of the museum’s doors (and it was, like this day, raining). A new model of the Graf Zeppelin overlooked the Wright Flyer in its usual place below me, at the bottom of the stairs. Behind me, I could hear Steve Buss, a friend and former coworker, narrating the film playing in the Skyscape Theater. 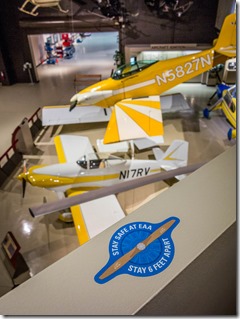 Stickers on the balcony railing indicated the desired distance between those overlooking the airplanes below. The composition of Van’s Aircraft RVs was new. So was the prototype Christian Eagle on a vertical line in the aerobatic gallery below. Behind me, a tape barrier put all of the hands-on aerospace physics experiments in the Willan Space Gallery out of arm’s reach. Around the corner, a similar barrier blocked the automatic whooshing sliding doors that led to KidVenture. An Aviore mural has replaced the outer space theme artwork. Interesting.

Stopping on my way to the Eagle Hangar, the bathrooms were open but the bubblers (drinking fountains to out-of-staters), were swaddled in black garbage bags and green packing tape. Given its tertiary use as an event space, the arrangement on the hangar deck changes often, or it did until the pandemic rearranged life. The fixed displays, the prototype P-51 and the F4U-4 that dominated the Navy corner on the opposite wall, hadn’t moved. But the reassembled Spanish Bf-109 Messerschmitt now flew above the P-51 at balcony eye level. 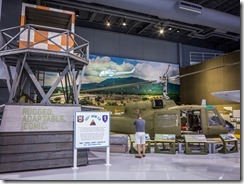 The dewinged Messerschmitt used to reside on the opposite wall, in a canvas nook festooned with Top Secret signs, because it shared the space with a replica of the Fat Man, the plutonium bomb that fell on Nagasaki 75 years ago tomorrow, August 9. In its place was a Bell UH-1B Huey. Descending the stairs at the far end of the balcony, I made my way across the floor to investigate it.

On the final panel telling of the Huey’s history, I found a surprise, a photo I’d taken from the USS Blue Ridge, command ship for the evacuation of Saigon in 1975. It capture the moment an ARVN pilot stepped out of a Huey. It captured the pilot’s fifth and final such flight. With his family, he’d arrived the night before in a CH-47 Chinook, which he later ferried to the USS Midway. With room for just one helo on the flight deck, he’d volunteered to ditch the Hueys so the next one could land. When the helo’s he’d ditched at lower altitudes almost fell on him, he started stepping out of them at higher altitudes. After he’d injured his ankle in the pictured hundred-foot fall, the flight deck crew started pushing the empty helos over the side.

Working my way back to the corner, I paid homage to Ernie Gann at his Chicken Coop writer’s shack. Peeking out the back door and seeing it rain free, I followed the path to Pioneer Airport. It was unchanged, except I don’t remember the flat right main-gear tire on the Ryan SCW, in the eponymous hanger of its manufacturer.

Making my way down the line to the vacant Air Academy lodge and Compass Hill, I notice a stack of blocks that were building new panels at the EAA Memorial Wall. What many may not know is that part of this area, between the wall and the memorial chapel, is a registered cemetery (I was even on its board for a time during my EAA employment). It is a small plot, and I went looking for the headstone that, when I’d last looked at it, was engraved with the names and birthdates of Paul and Audrey Poberezny. 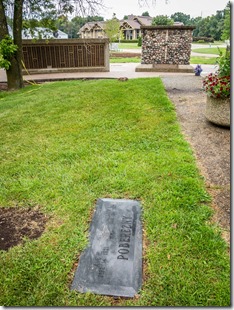 Paul passed on August 22, 2013, and I wondered if EAA had added this date to the headstone, which bears the words, “To Fly” under the wings of a US Air Force Command Pilot. It took me a while to find it, but there it was up a few stairs on the sidewalk behind the chapel.

Maybe they moved it to accommodate the additional Memorial Wall panels; regardless, its inscriptions were unchanged. Maybe he’s waiting for his wife (and EAA’s mom), Audrey, who was born in 1925, four years Paul’s junior. I’d pass her assisted living facility on my way home. Looking skyward, the clouds suggested that I get a move on. –Scott Spangler, Editor


This entry was posted

on Monday, August 10th, 2020 at 8:00 am and is filed under Aviation Education, Aviation Marketing, Drones, General, Lifestyle, Military, Recreational Aviation.
You can follow any responses to this entry through the RSS 2.0 feed.

You can leave a response, or trackback from your own site.